For a work-trip Wyatt and I went to Cancun. We’ve never been there. It was fun. 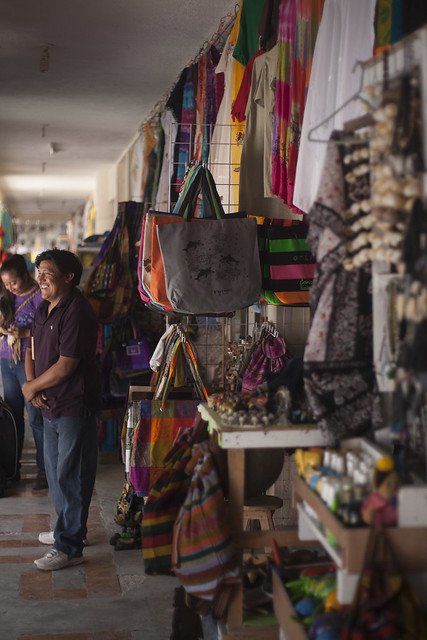 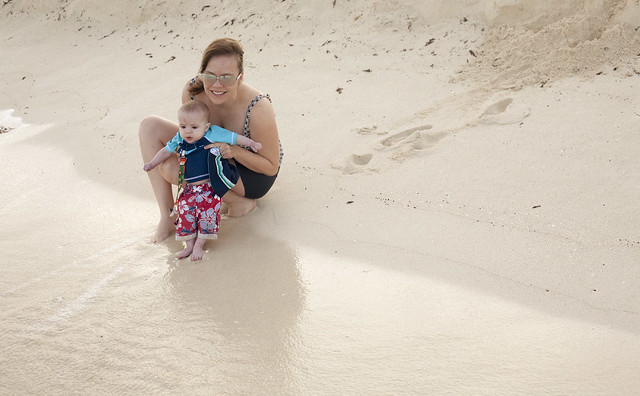 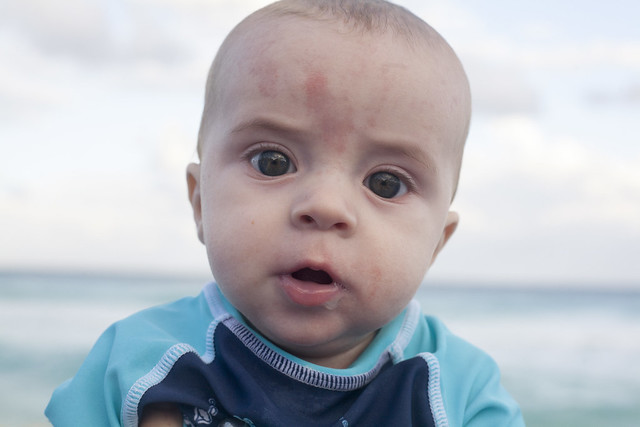 DAY 4 – THE ONLY DAY OF ANY REAL ADVENTURE

After 3 days of going around with people from the office, and kinda keeping our heads low, allowing others ideas of activities to take the lead, Wyatt and I decided for the last day we would rent a car and just “get lost.”

When we told that to everyone (of course we invited anyone who wanted to, to come with us) only one girl (wife of Wyatt’s partner) spoke up. She said “that sounds scary.”

So we were on our own. We rented the car. We had $27 USD, a cartoon map from the tour desk at the hotel, and a full tank of gas. We figured we were good for the day. We thought we’d head west toward the bigger ruins of Chichen Itza.

We figured we might need more cash, so at the first sign of a town, we turned. We wandered in cirlces in the town (about the size of Nephi, Utah) until we found a police officer who gave us direction to the nearest bank. That bank wouldn’t take our card, and the ATM at the next bank wouldn’t read Wyatt’s card . . . finally we got some money. $1000 Mexican Pesos (about $66 USD). We figured now we were flush with cash and could do anything left there was to do that day, and still refill the tank before returning the rental car. 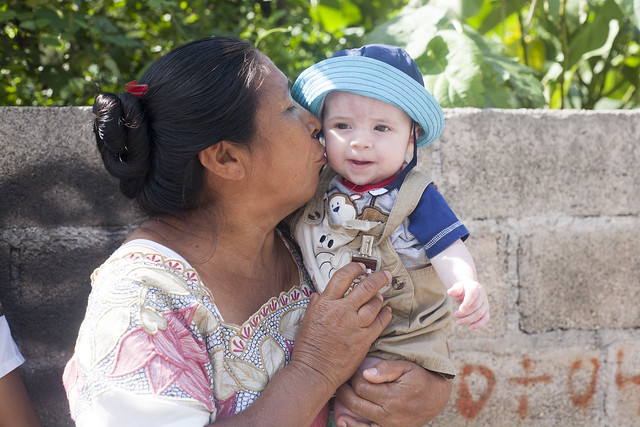 The day was slipping away though, and if we wanted to make it to the ruins, we figured we’d better move. Another police officer we met gave us directions to Chichen Itza avoiding the toll road (which he told us, would want yet another $20 USD before we even made it to Chichen Itza). 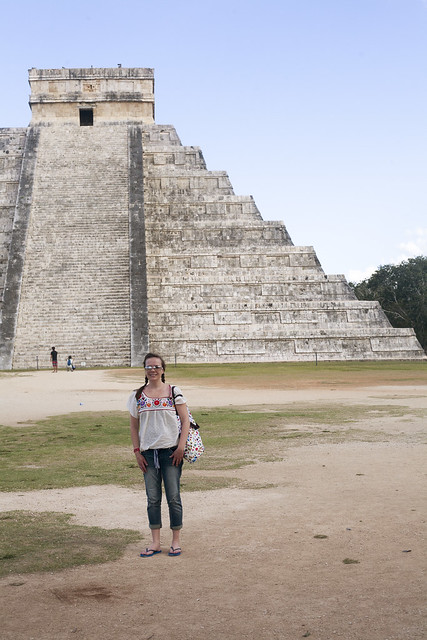 The free road was like highway 89 in Utah – it goes fast, but every once in a while it becomes the main street for a little puebla (town like that doesn’t even count as a town because it is only 5 buildings, but non the less the road has GIANT speedbumps to slow you down as you pass through.) These little towns were about every 5 – 7 miles – more on that later. 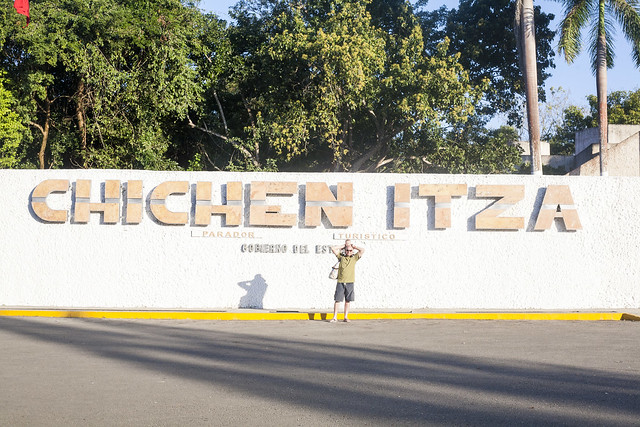 Anyway, we finally made it to Chichen Itza about 45 minutes before it closed. Because of that the whole place was EMPTY. Even the vendors were packing up their souveniers. We had the place pretty much to ourselves. We really liked it. It reminded us both of Angkor Wat in Cambodia – in size and scale and grounds. It was fun to walk through the park and see the buildings. It made me want to come home and read up on the culture of the Mayans. Haven’t done that yet. 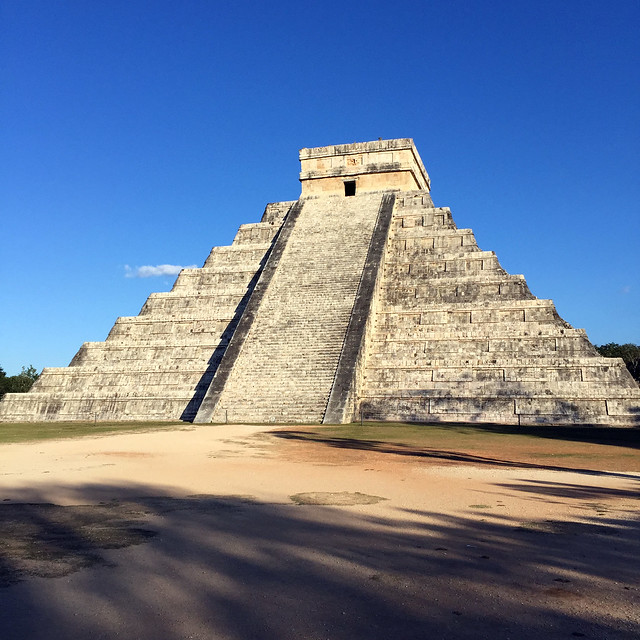 Finally we were kicked out of the park, so we drove down the road the big tourist Cenote. We figured it would close the same time as Chichen Itza, but thought maybe they’d just let us look. Well, it wasn’t closed, but still had about an hour until it did. So when we got there there was one last tour group of about 30 people, but they all left about 37 seconds after we arrived. Then we had the whole place to ourselves! We left daddy Nate in his car seat on the side of the pool while we swam. The guy who worked there said usually there are as many as 150 people there at any given time, so we felt lucky to have the place to ourselves. 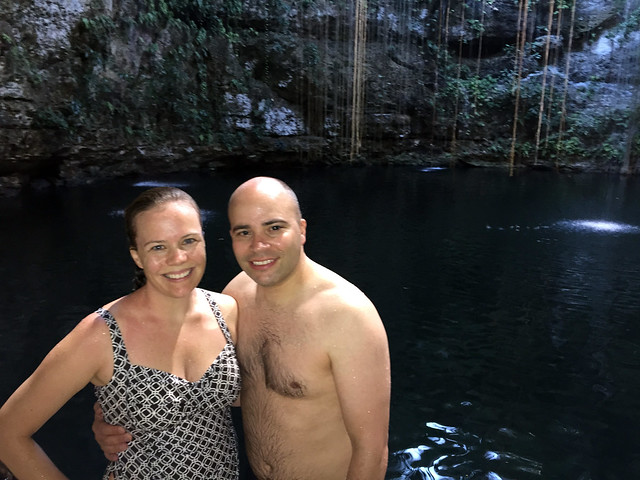 Finally the cenote closed and we got kicked out of there too. We turned east to start heading home. 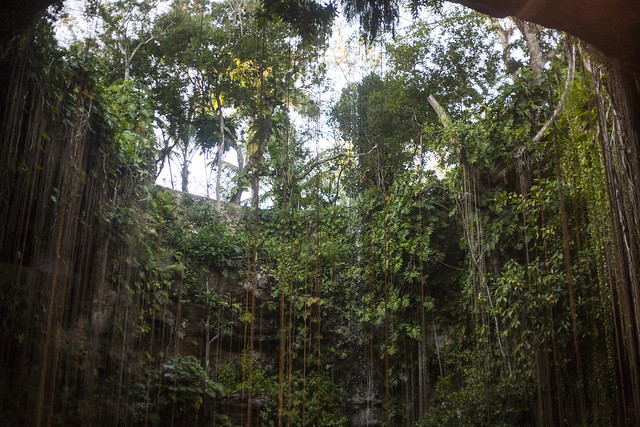 But first we figured we’d get dinner at the town we got cash in.

I’d been hoping for a real authentic Mexican meal since we got there. The hotel was “all inclusive” – but the meals were very catered to Americans. It was not thrilling. I really wanted to find some great local cuisine. As we’d walked through the little town we’d gotten cash in, I had seen a restaurant that had it’s menu out on the sidewalk. It seemed reasonable, and likely to have good food, so we headed back there.

Now it must be said – this restaurant was on the side of the main drag, but it looked authentically Mexican – you know, Christmas lights around the door that were flashing to the beat of some music, and looking into the restaurant it looked sparse and old. You know what I’m talking about. I didn’t have any real expectations for the experience. But then when we went in, they lead us down this alley way into the back where there was the beautiful garden courtyard with lights strung in the trees, and a koi pond and patio dining, and whole thing butted up against the wall of the town’s cathedral (built in the 1500’s according to our waiter), and Mass was going on next door so you could hear the choir boys chanting. And it was so warm and lovely. And the food was SOOOOOOOO good. I haven’t had that good of Mexican food in . . . maybe ever. So that turned out to be such a fun evening. 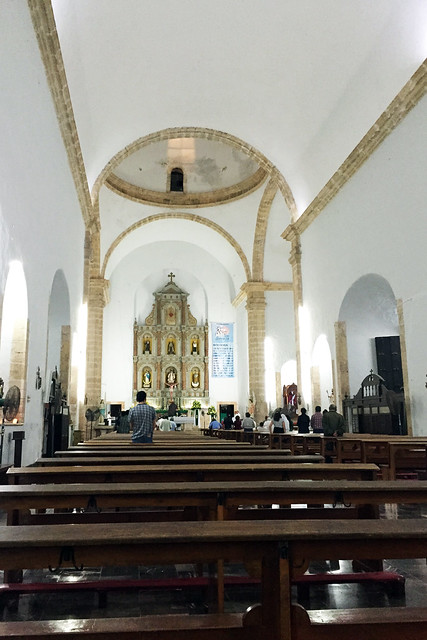 After that we went next door to check out the church. Mass was still going on, so we just sat in the back and watched the proceedings. It was lovely.

Then we went to the park across from the cathedral and people watched for a while (Wyatt talked to people . . . because, you know, he can. I just smiled).

Finally it was time to head back to Cancun.

Again, we were out of money. Chichen Itza was 3 times more expensive than we expected, as was the Cenote. And we used the rest of our money on that lovely dinner. But, we planned to drive the free road back to Cancun, and figured we were good for the evening.

So we packed into the car and settled in for what we were told was about a 2 hour drive.

Driving through Mexico in the dark turned into quite the experience. Remember how there were those speed bumps? The type that would launch a small car like the Nissan Tiinda that we rented. There were numerous times through the evening that Wyatt left rubber on the road as he braked for these bumps! Through the night we came to recognize the five or six various signs they used to warn of speed bumps (only RIGHT NEXT TO THE SPEED BUMP – no heads up) . . . but some of the bumps didn’t even have signs! And since the pueblas were about every 5-7 miles apart, it was like driving from Nephi to Salt Lake going about 30 miles an hour . . . it seemed to take forever.

About halfway home we were slowing down for some speedbumps in a town and we looked over, and what did we see? A GIANT TENT CIRCUS!! 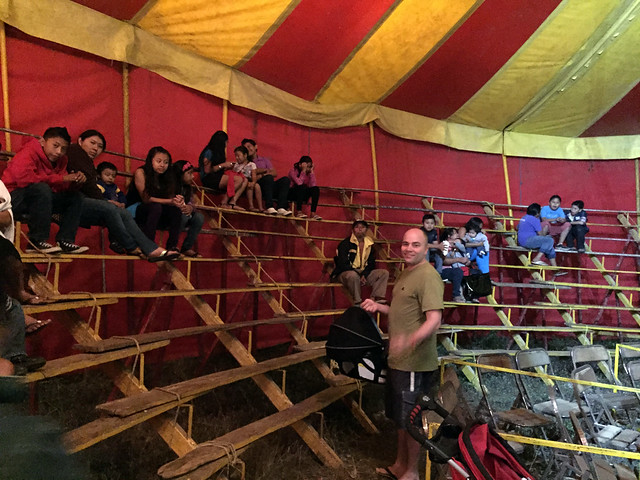 Wyatt and I immediately pulled over. Wyatt went in to check it out. (It’s now 9:30 pm mind you!) The ticket lady told him it was about to start in just a few minutes, and that the show would be over by 10:30. It was 20 peso’s per adult ($1.33 USD) (13 pesos for kids, but they didn’t make us pay for Nate) to get in. We dug around in the bottom of our bag and found the necessary money, with 4 pesos to spare!!

Of course, we had to go to the tent circus in the middle of no-where Mexico!!

It was the funnest thing ever. Think Toby Tyler – a real tent, and these old wooden bleachers and wooden folding chairs set up as the seating.  And real candied apples and popcorn. It was a family that put the circus on, and during intermission all the performers (about 8) came out and sold us the treats. It was seriously the greatest thing ever! 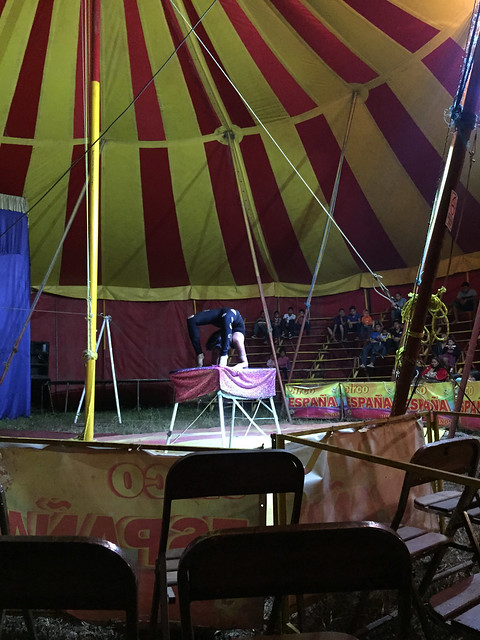 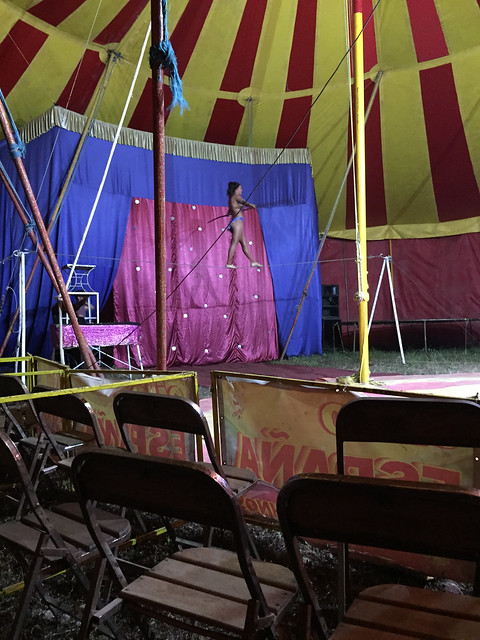 At one point they invited children from the audience up to play a game with the clowns. So cute! At the end of that SpongeBob came out to greet the kids, and they invited anyone else to come up and meet him. Daddy Nate got to go do that.

Hey Wyatt, remember the time Nate was in the circus in Mexico with SpongeBob Square Pants? 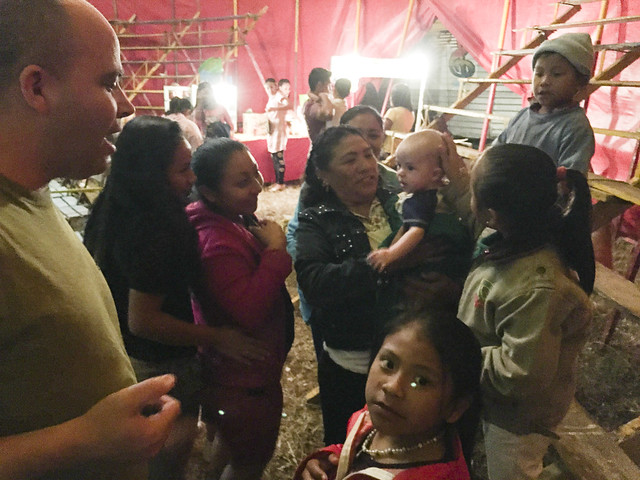 After the circus though, Nate got swarmed by all the women and children. He was really the biggest hit of the evening!

We stayed to talk to the family about their circus for a little bit, and then headed home. It wasn’t 10:30, it was 11:30, and it would be another hour before we’d be to Cancun. We really needed to get back!

Well, we got lost again in Cancun and drove all the way around the city to get back to our hotel. We got in a little after 1 am.

But it was a fun day!

The next morning we got up, returned the rental car, packed our bags, and headed home.

As we were there we talked about the poverty and difficulties of life in Mexico, and it occurred to me, and even more so now that I’m home, that while the Mexican people may be poor in the things of the world, they truly seemed to have a great wealth of love for their families and their relationships. Perhaps they were more wealthy than us Americans who limit family size and relationships in pursuit of worldly wealth and status. Perhaps they are more wealthy in the eyes of the Lord.

Also, I wondered: Why do we American’s consider ourselves to live in a free country? I was shocked at the stark difference between American freedom and Mexican freedom. There were numerous times I was surprised/concerned about legal consequences of certain actions that in Mexico simply aren’t legally consequential.

Yesterday, here in Utah, they passed a mandatory seat belt law. Now everyone has to wear a seat belt . . . or else. And I’m not saying wearing seat belts isn’t good. But at some point we lose our agency when we are soooo over regulated! As a law abiding citizen, I was surprised at how different it felt in Mexico to not have those regulations. It’s a weight I never realized I carried – the weight of worry of the legal implications of my every day life – until I was running around south of the border!

What a fun trip! I can’t believe no one else wanted to go with you. Wade and I have found that we always have more fun when we go find our own adventure and stay away from the guided tours. I’m glad you guys had such a great time. We need to go on a trip together sometime.

LOVE that you went to a tent circus in the middle of nowhere mexico. I’m with Katie, we need to go on a trip together!! I also LOVE that you have your blog back up. I love hearing your stories and looking at your pictures. You inspire me!

How FUN! I love it, other than I wasn’t with you. LOL.