When originally conceptualizing this road trip, in my mind we spent two days in San Fran. But one day proved quite adequate.

When we first pulled into town we made our way to the “Full House Park” – you know, the one where they’re having a picnic during the opening credits of Full House? My kids love that show (let’s be honest, Wyatt and I do too!) So we got ourselves a bucket of Popeye’s Chicken and went to the Full House Park overlooking San Francisco and the “Painted Ladies” houses and we had ourselves a picnic. You better believe I serenaded everyone with a fantastic rendition of the Full House Jingle while we ate.

After playing at the park we drove down to China Town. We made a rule for Olivia and Calvin: No English in Chinatown. We made them talk to all the shopkeepers in Chinese. Everyone thought they were adorable. But really, who wouldn’t?!

We bought the typical China-town-ish stuff, and perused the shops for all the stuff you never knew you wanted so bad! It was fun/painful. After some good shopping and Chinese chatting, we moved one.

Next we headed down to the wharf. We walked up and down the bay. We went into an antique arcade museum and a candy store and looked out at the ships. We ate San Fran pizza at the wharf (I loved it, I don’t think any one else cared for it!) We looked at the artwork of the street artists, and just generally perused the shops and walkways.

After that we made our way back to Ghiradelli square. I bought myself a few chocolates (YUMMMMMMMM!), we all ate samples, and then we got ice cream from the creamery. Fun fun fun!

Next we took a drive up and down the famous San Fran streets – we drove down Lombard Street, and up and down some wild hills. Finally we made our way to the observatory to watch the sun set over the bay.

Once it was dark we made our way back to Oakland where we stayed in the only hotel (in our price range) that had a vacancy – a Motel 6 right by the freeway (the monorail train literally passed right over the parking lot of our hotel). Wyatt hated it. Clearly it wasn’t the best hotel stay, but I’ve had worse.

The next day we felt like we had done pretty much everything we set out to do in San Fran, so we decided to cross the Golden Gate bridge and continue on our journey north toward the Redwood Forests. 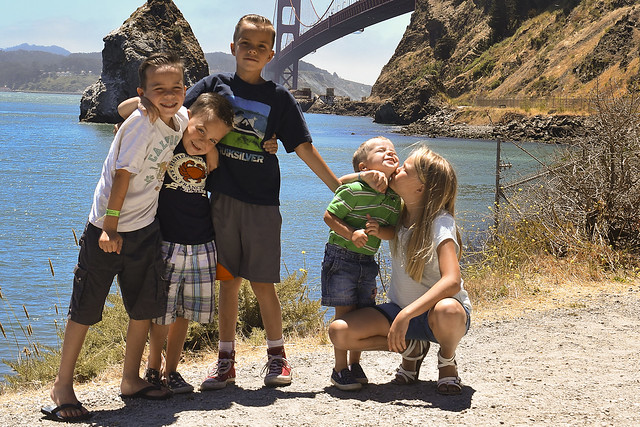 Now, it must be said I only pre-booked two nights of hotels on our trip. One was the night in Lee Vining right outside Yosemite National Park. The other one was in a town called Benbow, just outside of “Avenue of the Giants.” Again, I was just trying to pre-emp troubles in extremely touristy places. But thinking we’d spend two days in San Fran, I booked our night in Benbow for Day 6. So now having a day to kill we took a closer look at the map. And actually we did a lot of things that were quite fun! 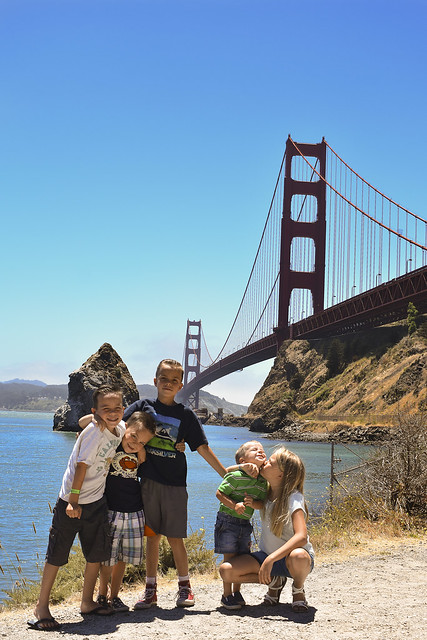 The first thing we did was visit the Marine Mammal Center on just the other side of the Golden Gate Bridge. We were able to see the work of this amazing organization that works hard to rescue and rehabilitate orphaned and sick sea mammals. It was fun to see the critters. 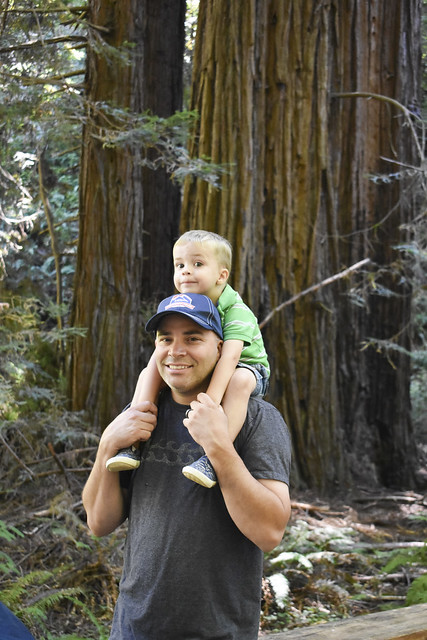 Next we ventured up to Muir Woods. This was our first foray into the Redwoods and it was beautiful/crowded. It was neat to see and fascinating to learn about the origins of the forest. It was owned by a private conservationist, but the water company of the area was fighting to take over the ravine in which the forest stood, by force of eminent domain, in attempt to build a dam and reservoir. The owner finally approached the President of the United States, Teddy Roosevelt and told him he would donate the land if he would designate it a protected area under the antiquities act. 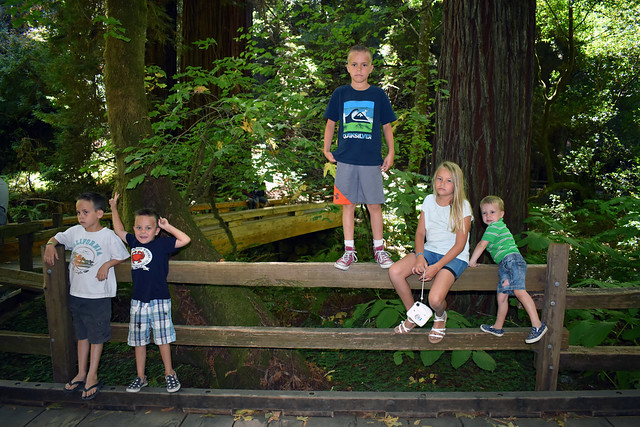 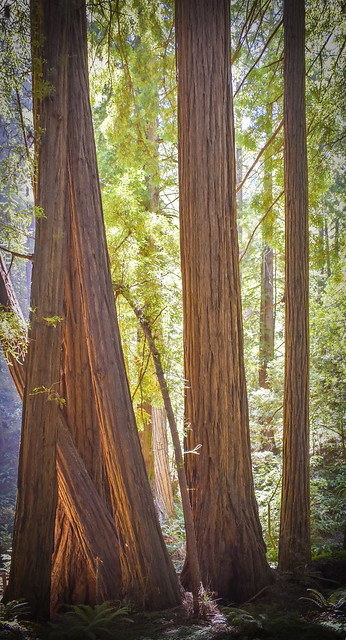 It was hard to imagine those big beautiful trees drowned to the world beneath a man-made reservoir. It made me stop to think about all the Utah lands that are designated to Federal protection – especially Bears Ears, which is being fought against right now. 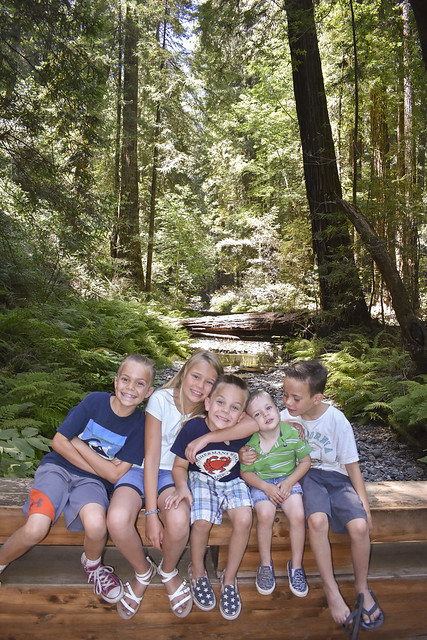 After Muir Woods we continued up the Highway 1 (not the 101) that hugs the coastline and stopped at beautiful beach where we played in the surf and flew the kites we bought in Chinatown the day before. 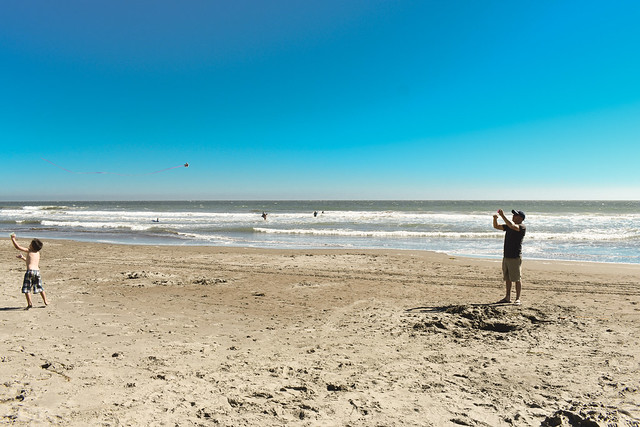 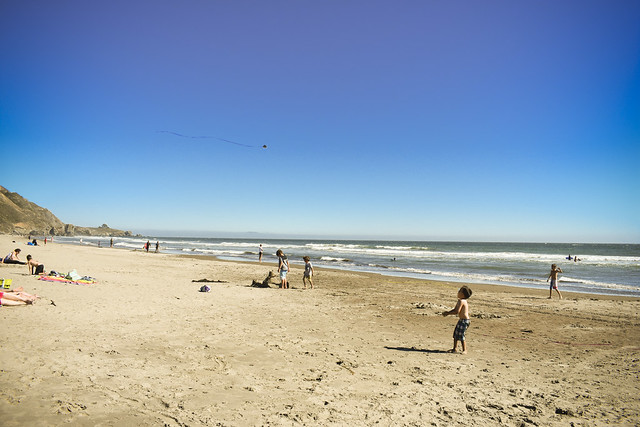 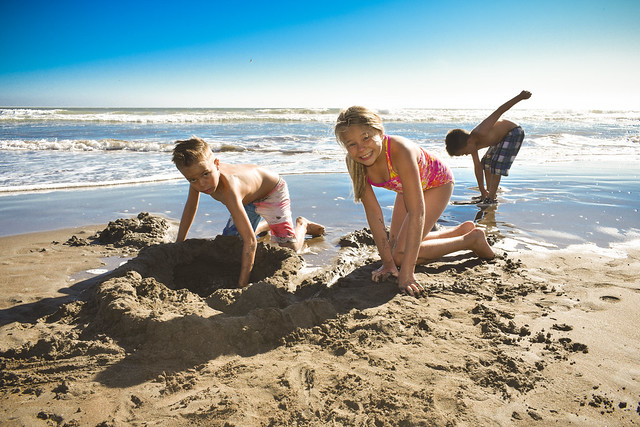 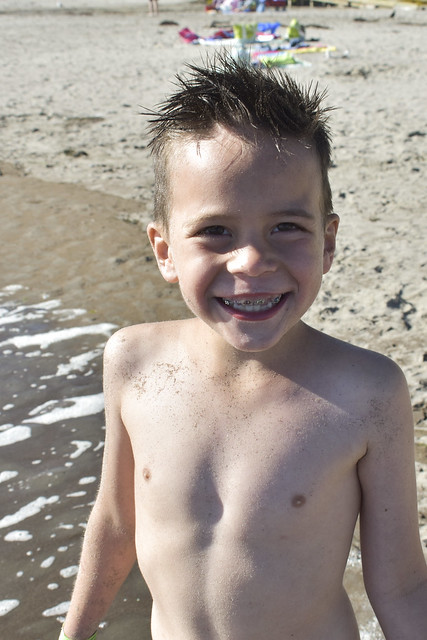 After a few hours at the beach we continued up the 1 – which proved a much more twisty (read: CAR SICK!) road than we anticipated. We finally made our way back to the 101 and cruised up to Benbow for night at the Comfort Inn.

We struck out for the Avenue of the Giants – a stretch of road along the 101 with groves of giant redwoods flanking either side of the road. We stopped in several of the groves and got out to explore. There was so much magic! Some trees were hollow and you could imagine making forts and living in the wild. Other trees were felled and made for a lovely playground. And others simply towered above you- making you feel so small and insignificant in the most inspiring way. 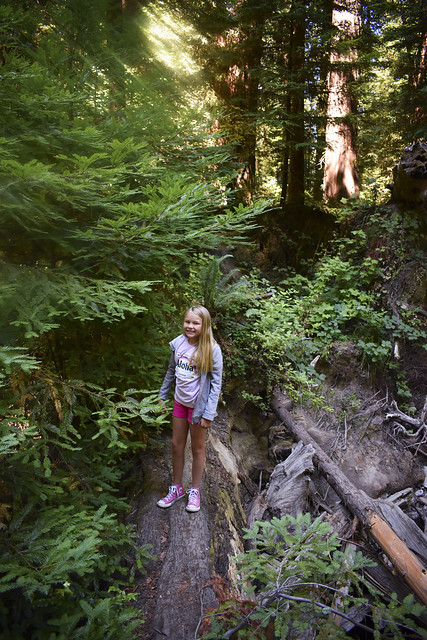 We went to the Shine Drive Through Tree at Meyers Flat. We paid to drive the ‘Burb through – the guy looked at the car and said – “This is as big of a car as can technically fit.” And he wasn’t kidding. After two or three attempts to squeeze the car through, Wyatt thought better of it and backed out. 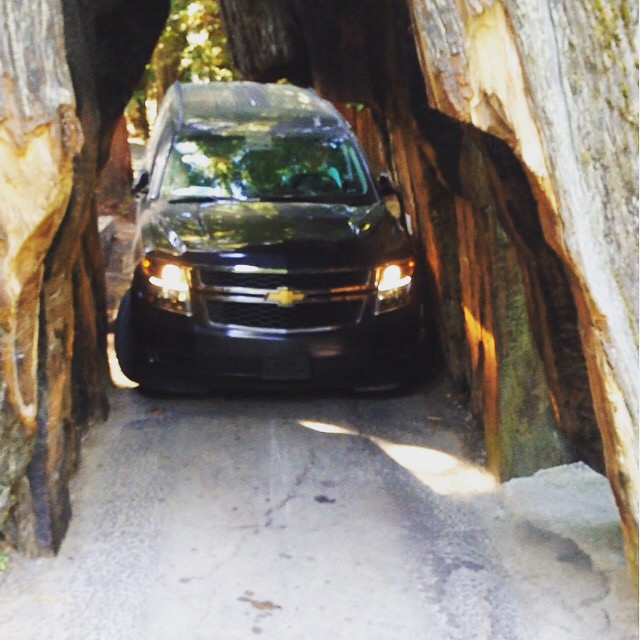 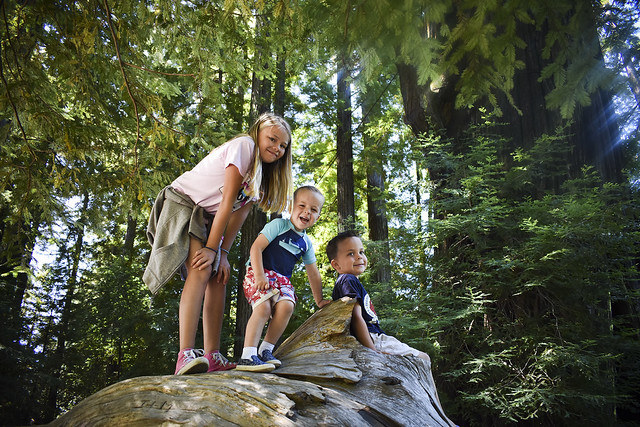 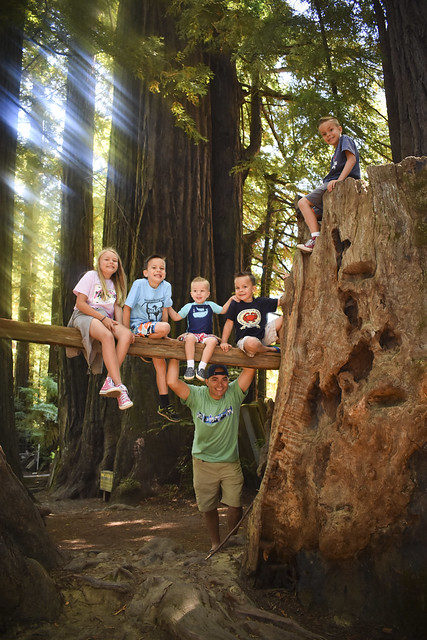 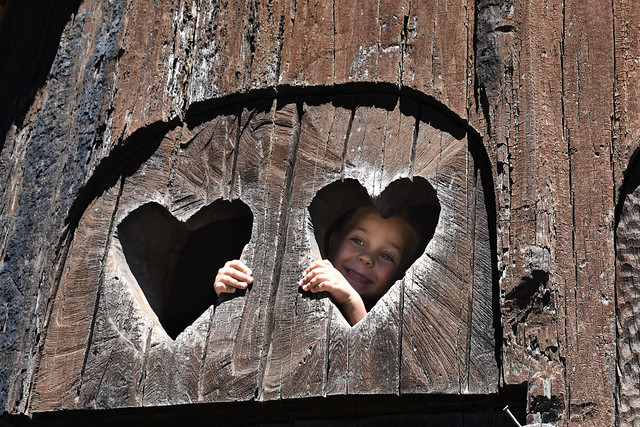 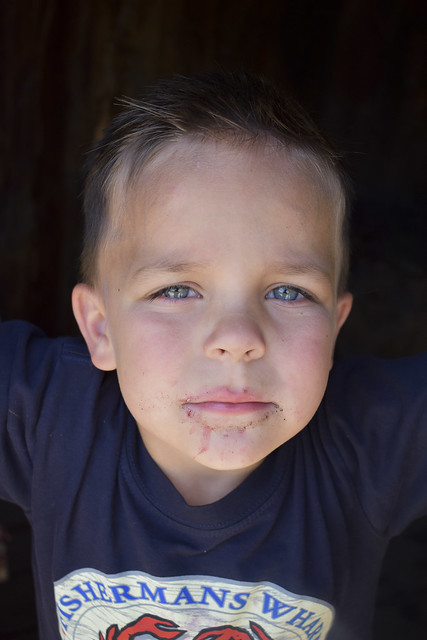 They also had a lot of fun tree stumps to climb on and even a cute little tree house for the kids to play in. Next to the tree house they had these HUGE blackberry bushes where we guzzled our lunch. Wyatt even convinced Roo that Oreo’s grow from blackberry bushes, and had Roo picking Oreo’s to his hearts content.

Further down the avenue we stopped at The Garden Club of America Grove. About 100 yards through the trees from the parking lot you came to place on the river where it was flat, and the beach was sandy, and the water was slow and not too shallow. There we set out a blanket and swam the afternoon away. There were silvery fish that swam among our toes and we had a great time searching for frogs and splashing in the river. What a peaceful, easy afternoon! 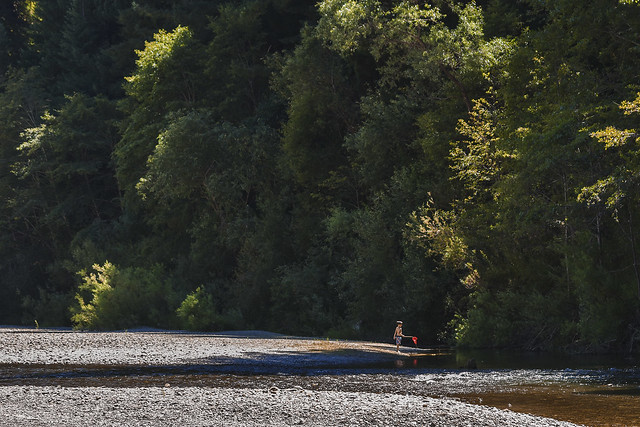 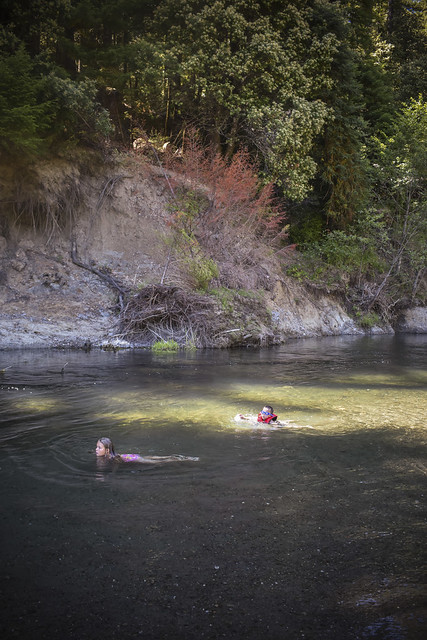 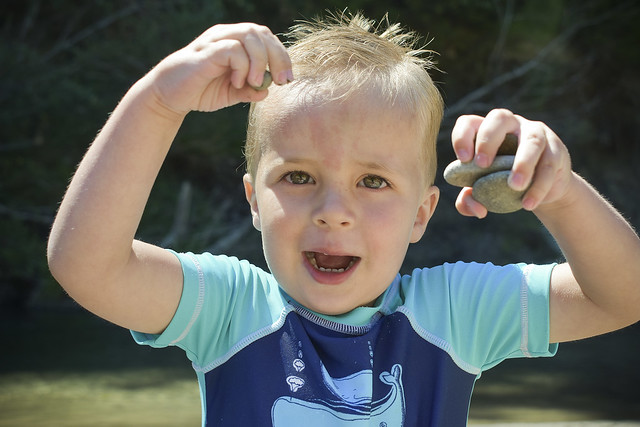 That evening we drove to Eureka, California. We stayed in Eureka two nights (yay! We didn’t have to pack/unpack our hotel each day!).