Getting There
The EPIC Thailand Trip PART I

One day last April we were out working in the garden when Wyatt got a text from Uncle Alex. “Flights to Thailand for $400 round trip.”

So that day I bought 7 round trip tickets to Thailand for November. They ended up being right around $420/person including ticket insurance, baggage, etc. CRAZY GOOD DEAL!

But I was too busy to worry about it too much until just about a month before. Then I finally got around to planning our trip — where we would stay, what we would do. We always travel with a great deal of flexibility, but seeing as it was our first international foray with five children, we did plan much more than we usually do. 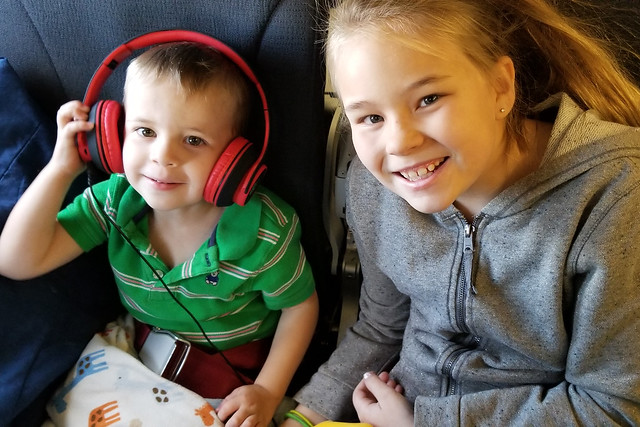 November came, and the day of our trip arrived. We were flying out of Vegas because, um, no good flight deals ever pass through Salt Lake. So we had to drive to Vegas and spend a night in a hotel and then fly out first thing the next morning.

And I had it all planned out:

Kids go to school in the morning. I make one final sweep of the house, cleaning it spotless. Then we load up our already packed bags and we pick up the kids at school about 10 am, drive to Vegas, spend the evening playing and relaxing before going to bed at a decent hour so we can get up and be at the airport at 5 am for our 7 am flight.

For some reason Wyatt decided that morning that he just needed to rewire the detached garage before we could go. (Insert eye roll. Seriously Wyatt. Seriously.) So finally at 4 o’clock, all the kids were home making a mess of our neatly cleaned house when Wyatt finally came in and announced he was ready to go. 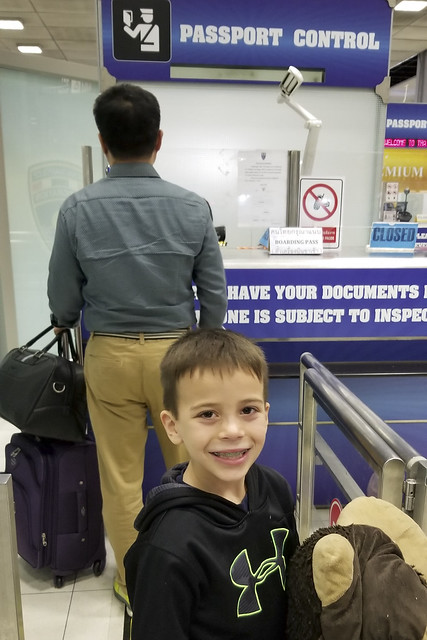 Do you have all the passports? Wyatt asked.

“Yes, I have six passports.”

Did you read that?

At this point sheer panic set it. We were less than 18 hours away from our flights, and Wyatt didn’t have a passport. 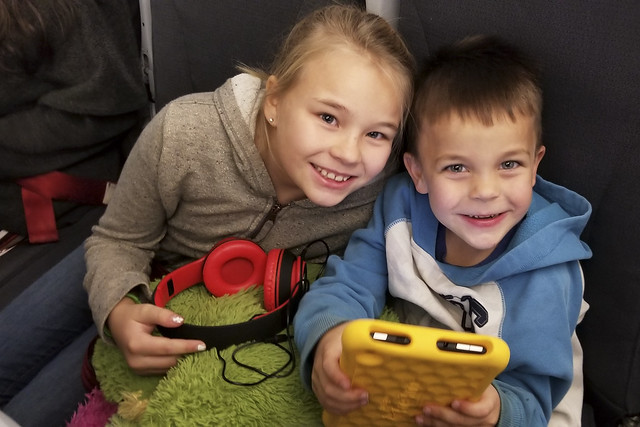 After a couple more hours of panic and trying to figure out what to do (cancel the entire trip?) and time spent on the phone we decided to drive to Vegas (it was 6pm by then).

As we drove we also got Wyatt an appointment at the San Diego passport office for a same-day passport the next day (Los Angelas’ office was 2 weeks out for an appointment!). We also got him a flight from Vegas to San Diego, and new flights from LA (cheaper) to Thailand for the next evening (about 15 hours behind us). We bought those flights on faith that everything would work out and he would have his passport in hand and be able to get to LA without further incident.

We arrived in Vegas just after midnight. We packed all the kids in and sent them to bed, then Wyatt and I went into the bathroom to discuss . . . are we really going to do this? Send me to Thailand with five small children alone?

Finally we went to bed. I didn’t sleep well. The whole night I had this feeling of over-whelmed-ness — if I got on that flight and something went wrong . . . there was no going back. Still, I was determined. It will be fine. It will be fine. I just kept telling myself that. *I should note that I was worried about something going wrong with the kids — meaning they really act up and I can’t wrangle them or something. I wasn’t worried about the plane crashing or anything like that because, well, that’s just not how I think.

While I didn’t sleep well, Wyatt didn’t sleep at all. I think he was in pure anxiety and panic mode. It took a lot of faith in me on his part to let us walk through that security line the next morning.

Andrea and the Kids Get To Thailand

We walked into the airport at 5 am, our flight was around 7 am. We checked in. I took all the luggage with me so Wyatt wouldn’t have to hassle with it as he flew an inexpensive commuter flight to California.

And then we walked through the security. Wyatt watched us go through, and then we were gone. We made it to our gate with plenty of time. Calvin brought his Book of Mormon so we took a few moments to read our scriptures together. I think that helped everyone calm down immensely.

Everett was having some pre-flight anxiety about how it would feel to actually fly (would the plane crash? would it be scary?) and he stayed close to me.

The other kids were a mixture of sheer excitement and aprehension. Of course we had talked to them about sticking close and listening extra carefully to momma as we traveled by ourselves to Thailand!

The flight from Vegas to Vancouver went smoothly. We had two rows by the windows. I put Olivia, Calvin and Roo in the row in front of me. Everett, Nate and I took the row behind. The kids (and especially Everett) quickly leaned how fun flying is: food, and personal TV’s! They were in happy heaven!

Our layover in Vancouver was a couple hours. We got some lunch at Subway and text Wyatt. Then it was time for our long flight – Vancouver to Hong Kong. 14 hours. 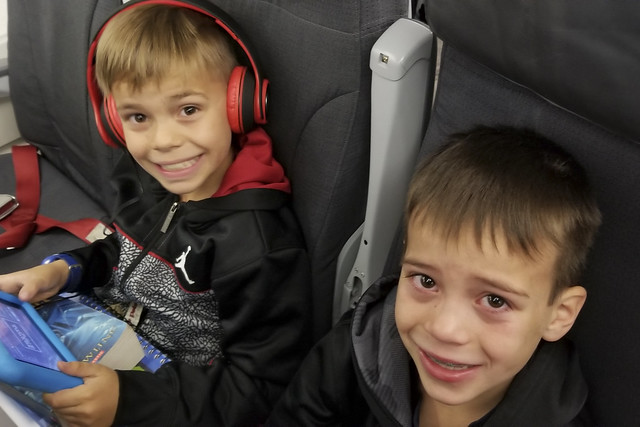 Again we had two rows by the windows. It was great because I was able to isolate the kids from the other passengers so I didn’t have to worry about creepers being near my kids. They each had a personal TV screen with games and kids movies in their head rests. And the stewardesses just kept the food and drinks coming. Eventually the kids all fell asleep. The flight passed by without too much incident.

The layover in Hong Kong wasn’t too long. Just enough time to move from one gate to the next. The kids were able to help me ask for directions, and they really just charmed the customs and gate workers. YAY!

And then for our last flight – a 3 hour flight to Bangkok. Again, it passed by without any incident. 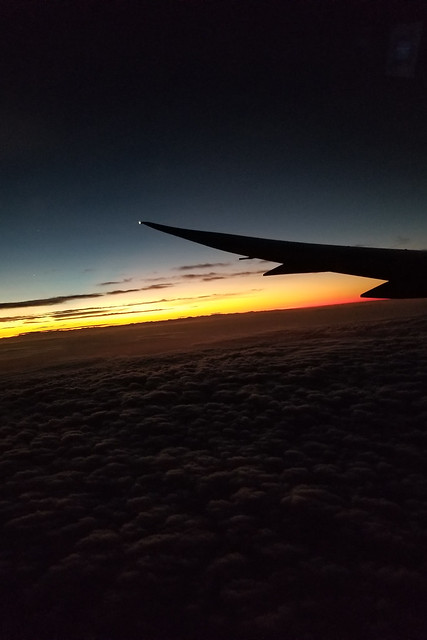 Now for the moment of truth – passing through the customs gate in Bangkok was quite nerve wracking. We had a hotel reservation for an American Brand hotel (what was it? Holiday Inn?) and had requested transfer from the airport, but had never received a confirmation. It was a little after midnight when we passed through customs into the rush of international travelers in the main concourse. But there, just 30 feet from where we exited, was a Thai woman holding my name on a sign.

And so we went to the hotel, checked in, took turns for showers and baths, and watched cartoons into the night.

I text Wyatt as soon as we landed, and again at the hotel, to let him know we were safe. But he was in the air, and I knew he wouldn’t get it until morning.

Wyatt Gets to Thailand

After Wyatt watched us go through customs he received an alert on his phone: his flight to San Diego was delayed! Not wanting to waste any time he ubered himself from the airport to a local Walgreens and got a passport photo that he knew he would need when he landed. 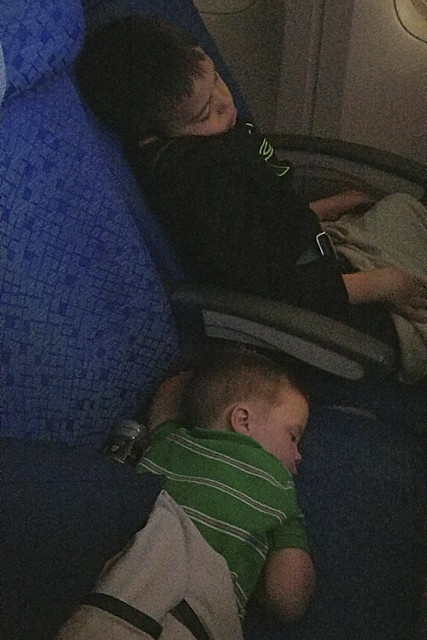 He finally flew out about 4 hours late (which added to stress because, you know, he’s trying to still catch a flight that night).

As soon as he landed in SanD he rented a car and went straight to the passport office. He said when he walked in there was one other person in the entire office (besides the employees). So he basically walked right up and started filling out paperwork. When he was done and turned around he said the office had filled in with 100 people trying to get a passport during the lunch hour! Wyatt was able to get his passport and be on his way to Los Angeles, via the infamous 405. He had 8 hours til the plan left and spent at least 4 of those in LA traffic. He was able to make it in plenty of time, and catch his flight: LA to Xiamen China and then on to Bangkok.